WHAT’S SO GOOD ABOUT UPVC WINDOWS AND DOORS?

Fonirte / Uncategorized / WHAT’S SO GOOD ABOUT UPVC WINDOWS AND DOORS?

The uPVC window market is relatively small in Australia right now, but it’s growing fast. I caught up with Kathrin Sender, Managing Director at Integra Windows recently to find out what’s so good about uPVC windows and doors.

This isn’t the first time I’ve featured a uPVC window supplier on the show . And it certainly won’t be the last. uPVC, or unplasticised polyvinyl chloride is gaining in popularity as a window and door frame material due to a number of its qualities.

Not everyone is immediately in favour of uPVC as a building material. Kathrin explains that the main objections she hears are, “It’s not aluminium”, and “it’s not wood.” The biggest objection seems to be just a consequence of what people are used to.

I also questioned Kathrin about some of the chemicals used to make uPVC and the toxicity of the material, because I know PVC use is a barrier for Living Building Challenge projects. According to Kathrin, uPVC does not contain phthalates which are the harmful components in the red-listed PVC.

uPVC does include titanium dioxide as a UV stabiliser. This stops the material crumbling or yellowing. In Europe, uPVC typically has around 3% titanium dioxide content, but in Australia and New Zealand, it’s increased to 9% in order to account for harsher UV radiation.

A cut away section of typical uPVC frame on the Integra Windows website shows one of the key thermal advantages to the design. Beyond the thermal properties of the material itself, (uPVC is a poor conductor of heat, whereas aluminium is a really really good conductor) the closed cell structure inside a uPVC frame adds significant thermal insulation. Because these cells are closed off from each other, air movement is restricted within the frame. And restricting air movement restricts the movement of heat. It also restricts the movement of sound, which is another key benefit of well insulating and well sealing windows and doors. They make for very quiet homes. 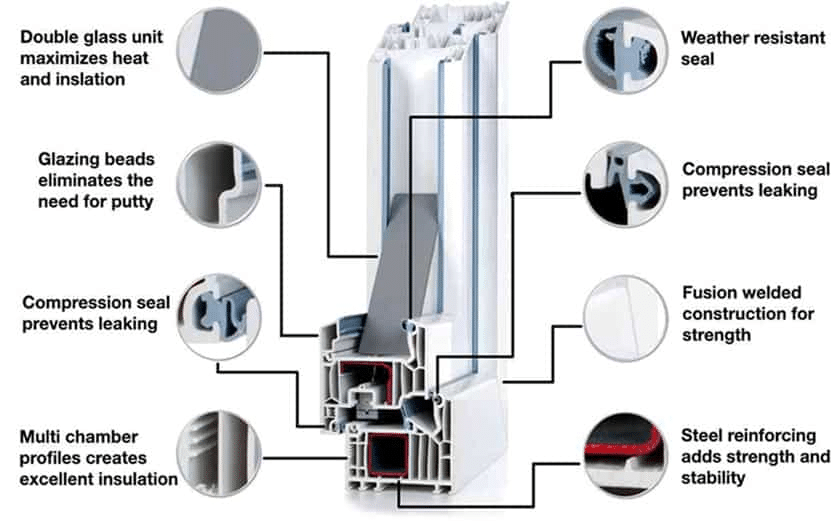 Beyond the thermal and acoustic performance, uPVC windows are very low maintenance because they never need painting and they’re very secure.

‘Tilt and turn’ is not unique to uPVC. Most high-performance timber frames and even some higher-end aluminium frames offer hinges and hardware that allow for this functionality.

Tilt and turn is a common style of inward-opening window in Europe, and for good reason. When tilted open at the top, windows and doors can provide good ventilation while keeping the house safe and secure. Inward opening windows are common in Europe because they allow for external shutters and they make it easier to clean the glass. In Australia and New Zealand, they also make sense because they readily accommodate external shading.